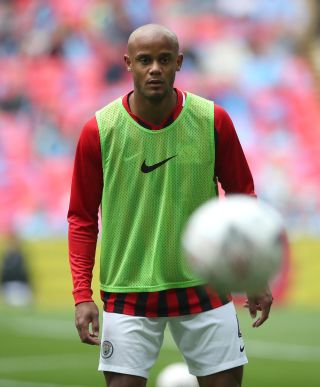 Anderlecht player-manager Vincent Kompany has decided to hand over match-day responsibilities to head coach Simon Davies and appoint himself captain in an bid to help turn the club’s fortunes around.

Former Manchester City captain Kompany returned to his old club during the summer to take a first step into management.

However, it has not proven an easy transition, with Anderlecht yet to win any of their opening four matches, with two defeats – the worst start in some 21 years.

Centre-back Kompany, 33, has now decided to keep his focus with helping the team on the pitch when playing as Davies takes on more tactical responsibilities.

“We are trying a new project here, it is not going to happen overnight it is a new playing style for the club,” Davies said at a press conference, broadcast on the Anderlecht website.

“We need some stability and one of those things that will change straight away is that Vinnie is going to be captain from the next game.

“He is going to lead the team and really concentrate on being the captain on matchday.

“We work so well during the week. Vinnie and the club have a vision, and we all work to it as a staff.

“But it is important that he is a player on match day, so this is one thing we are learning about each other now.

“If Vinnie can be the best player in the league, which he is, and lead on the field, and I can take the responsibility in terms of other things like all the changes, how we play if we need to change shape in the game, then I will take that responsibility with the staff on the side.

“This is a new and different situation. All we know is we are going to be successful, and this is just another step, a little bit learning about each other.”

Davies added: “It will not be easy in the coming weeks, with matches against Genk, Standard Liege, Antwerp and Brugge – but give us the necessary time and then I am 100 per cent sure that the results will follow.”