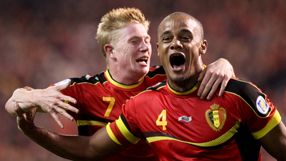 Only several fine saves from Scotland goalkeeper Allan McGregor, Belgian imprecision and some luck had kept the visitors in the game for more than an hour.

Scotland's best two chances came from free-kicks on the edge of the penalty area. Shaun Maloney forced Belgium keeper Thibaut Courtois to leap high to his right in the 24th minute, while Kris Commons stretched Courtois shortly before halftime.

Belgium made their dominance pay after the break, first through Benteke's far-post header and then through Kompany, who turned neatly just inside the area before whipping a right-foot shot into the top right-hand corner of McGregor's goal.

Belgium have 10 points from four games and lead Croatia on goal difference, with the group looking like a battle between the two, particularly after Serbia's 1-0 defeat in Macedonia.

Belgium coach Marc Wilmots and his players continue to temper growing expectations that they will qualify for a major tournament for the first time in over a decade.

Belgium played before a vocal sell-out home crowd for the third match in succession.

"We can be happy, but it's the fourth match... we are not in Brazil yet. We are still in Brussels," Wilmots said, insisting that Macedonia home and away inside five days in March would not be easy. Four points, he said, would be the goal.

Wilmots added that the experience of the likes of Kompany and holding midfielder Axel Witsel meant the team did not panic when early chances failed to yield goals.

"I told everyone to stay calm. We would create chances and the goal would come... even if it had ended 0-0 it would not have been a disaster," he said.

Scotland, who conceded two late goals in a 2-1 away defeat to Wales on Friday, are bottom of the group with two points from four games.

Manager Craig Levein said Scotland had pinned their hopes on getting a goal on the counter-attack.

"At a time when I felt we had weathered the worst of the storm we lost concentration at a set piece," he told reporters. "I cannot sit here and say we deserved to win the match.. But we have to acknowledge how good a team Belgium are."

Levein faced a barrage of questions about his future but said: "All I can tell you is I want to remain as manager."