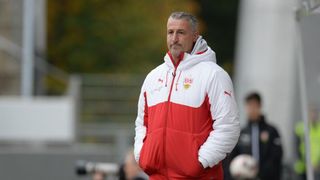 Jurgen Kramny has been appointed as Stuttgart head coach on a permanent basis.

The 44-year-old has presided over five games as interim coach of the Bundesliga club following the exit of Alexander Zorniger last month.

In that time Stuttgart have claimed two wins and two draws and suffered just one defeat.

And he has been rewarded for those results with a contract until June 2017.

Kramny said: "The club has given me confidence and for that I thank you warmly. It's a big responsibility, especially in the current situation. We're hot on the task."