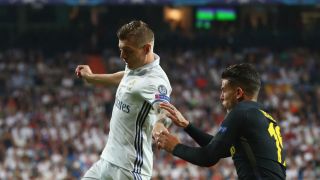 Cristiano Ronaldo scored his seventh career hat-trick in the competition to put the holders on the brink of a return to the final at their rivals' expense.

Kroos performed masterfully, both in open play and with his persistently challenging dead-ball deliveries, and the Germany international credited Zidane for undoing opposite number Diego Simeone.

Atleti started with Antoine Griezmann and Kevin Gameiro in attack but were overrun in midfield behind the French duo, as Casemiro and Luka Modric patrolled central areas and Isco slotted in at number 10.

"It's a very good result, of course. It's much more than we expected – a great game, a great result but it's only the first leg," Kroos told BT Sport.

"We had a very good day, we had good tactics. We always had one more player in midfield. Normally we play with three and three in front but we used four and it allowed us to control the game.

"We had a very good defence and we were able to pass the ball in difficult or dangerous areas.

"I think we did very well and deserved the result. Next week we have to go to Calderon and it’s always difficult there."

Nevertheless, Kroos conceded this effective ploy only bore fruit due to the Santiago Bernabeu's feted superstar.

"It's great to have a player like Ronaldo," he added. "You can play well in defence, you can control the middle but you need a player who can score to get the result.

"He scored five of six goals in the quarter-finals [against Bayern Munich] and here another three – it's unbelievable."