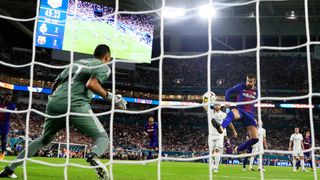 LaLiga are in talks over the prospect of hosting matches overseas, according to president Javier Tebas.

Tebas has backed the proposal of staging certain fixtures on foreign soil in the past in order to encourage more lucrative broadcasting and sponsorship deals.

Kick-off times were altered for the 2017-18 season to suit audiences in Asia, with Tebas stating in March that Spain's top flight "will continue to take steps to ensure that this part of the world can enjoy LaLiga as much as possible".

And the 55-year-old has now reiterated his support for games being staged abroad, although he says discussions are very much at a preliminary stage.

"LaLiga is global entertainment and we want to grow the international appeal of LaLiga," he said, as quoted by the Financial Times. "As part of that effort we are discussing the option of playing some of the league matches outside of Spain.

"These discussions are still in early stages but, as LaLiga, we support the idea."

It is reported that fixtures could be held outside Spain as early as 2018.

The will be supporting in all the way from Sydney, Australia! Where will you be watching from?  September 8, 2017

The news comes less than two months after an International Champions Cup clash between Barcelona and Real Madrid was watched by a 66,000-strong crowd in Florida.

Charlie Stillitano, chairman of tournament founders Relevent Sports, has backed the idea of staging competitive matches in ICC locations, including the United States and China.

"The future [for Relevent] is to do games that are official games in the US, China and other places," he said at the Soccerex event in Manchester this week.

"There are already leagues – and I can't say [which], because they are confidential conversations – that are talking to us about potentially doing something in the future."

Speaking in 2015, Tebas outlined his plans to make LaLiga the most successful league in the world on both a financial and sporting level by exploring the prospect of playing games in foreign countries.

"In the medium term, we will play LaLiga and Copa matches abroad," he said. "In the short term, this is not going to be possible. We still can't say when these matches will be played. These projects still need to be developed.

"The Bundesliga is the most solvent league in the world. The Premier League is the one with the biggest income with their television rights.

"LaLiga is the one that wins all the trophies, but we want to be first in all three aspects, not only in sporting terms. We're working on it."