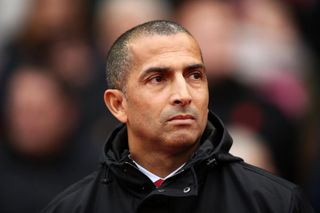 Nottingham Forest head coach Sabri Lamouchi blamed his players for getting caught up in the emotion of the dramatic late climax to the 1-1 Championship draw at Reading.

Forest thought they had won when skipper Ben Watson fired home from the edge of the area in the sixth minute of stoppage time.

But Reading levelled a minute later when Forest defender Tobias Figueiredo turned Jordan Obita’s near-post cross into his own net.

Forest top scorer Lewis Grabban had a lobbed effort cleared off the line earlier in the second half while Reading’s Tyler Blackett also struck a post.

Lamouchi said: “At the end of the game, when you are lucky to score in the 96th minute, then the game is done. It is over, the game is finished.

“But then it’s not. This was our fate, we’d never made a mistake before.

“Then we make one mistake, it was probably the emotion [of scoring first] and then we forgot to do our jobs.

“We did our jobs for 95 minutes then it was a long ball, cross and an own goal.

“Yes, probably, we lost concentration after scoring. I just feel upset for the boys because, after our goal, they also thought the game was done.

“Only football can give you this emotion. It was unbelievable at the end.

“It think that maybe we deserved to score one or two goals in the first half because we controlled the game.

“The second half was different because Reading played more directly and they found or two chances to score.

“To be honest, though, it was a fair result. Before I came here, I would have been happy with one point.

“We need now to enjoy a day off and forget that emotion at the end – the good and the bad.

“We must stay positive and focus on the next games.”

Reading are now unbeaten in eight matches in all competitions.

Manager Mark Bowen said: “That was crazy at the end.

“My take overall is that probably we were a bit sloppy in the first half.

“In the last few games that we’ve played, our midfield has controlled a lot of the possession and looked assured.

“But in the first half, we were a bit rusty. We weren’t really at it.

“No harsh words were said at half-time. We just talked about it.

“I said that we’d had 45 average minutes in our last six games. So go out there and enjoy your football, start playing.

“We did that in the second half. I thought that we went out and dominated most of the game.

“It wasn’t a classic of a game but, in the second half, we showed a lot more of what we’re about.

“But even in those last seconds [after Forest had scored], the lads didn’t let their heads drop.

“To come straight back into it like we did, it shows that we’re not in a bad place in terms of what we’ve got to offer in the back end of the season.

“We thought the game was lost but I see a resilience and a focus in the side.

“We’re in a race with a number of clubs, not least Nottingham Forest, for the play-offs.

“Those characters I saw in my team today will stand us in good stead.”