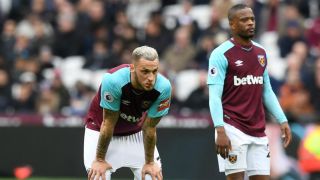 Manuel Pellegrini's top priority at West Ham is to strengthen their attacking options so the Hammers can challenge for a European place, according to Stan Lazaridis.

The Australian winger spent four years with West Ham in the 1990s, helping them to two top-10 finishes in the Premier League and a place in the 1999 Intertoto Cup.

Last season was a struggle for the Hammers, though, with David Moyes guiding them out of the relegation zone and into the safety of mid-table after replacing Slaven Bilic in November.

Pellegrini inherits a squad from Moyes with the likes of Marko Arnautovic, Andy Carroll, Javier Hernandez and Jordan Hugill among the Hammers' attacking ranks, but Lazaridis says fresh faces are needed ahead of the 2018-19 campaign.

"The problem with West Ham has been up front, ever since [Dimitri] Payet left they've been trying to replace him," Lazaridis told Omnisport and Goal.

"In the end they've escaped relegation and I think there has to be some real good scouting and some good signings, particularly up front and maybe another centre-back.

"It's a great club, I know the owners and I know they're not going to be happy with [last season].

"They're always striving to push up the ladder and West Ham with their following, worldwide that is, because they're well followed in Australia, supporters want a bit more, they want to be in a cup and pushing for Europe and why not?

"We've seen Southampton and Burnley - you're telling me that Burnley is a bigger club than the Hammers? No disrespect to Burnley, they can do it and that's great for them so why shouldn't the Hammers be playing for something like that?"

And Lazaridis says making the London Stadium a fortress will be key if West Ham - who signed Jack Wilshere on Monday - are to battle for a top-10 finish next season.

"It's almost as if the other teams are going there as if it's their home game," he added.

"Upton Park was so intimidating - even for me to play! And that gets you going and I just feel the Hammers have lost that 12th man.

"With the stadium I understand that's the direction clubs are going, particularly from a financial point of view but I think West Ham need that back because they've got some real loyal, hardcore supporters."