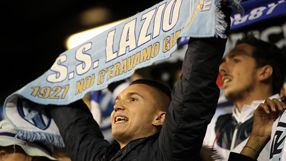 According to media reports Spurs striker Jermain Defoe, winger Aaron Lennon and second-half substitute Andros Townsend were the target of monkey chants although manager Andre Villas-Boas said he did not hear anything.

The Group J match on September 20 was played at White Hart Lane in front of UEFA president Michel Platini and ended in a 0-0 draw.

The Italian Serie A club have struggled with a right-wing element among their fans for some time.

European football's governing body UEFA is under increasing pressure to do more than impose fines on teams whose supporters are guilty of racist conduct.

England Under-21 defender Danny Rose said he was racially abused and pelted with stones in the southern Serbian city of Krusevac before, during and after Tuesday's European championship qualifying match that his team won 1-0.

UEFA has opened disciplinary proceedings against Serbia and England.