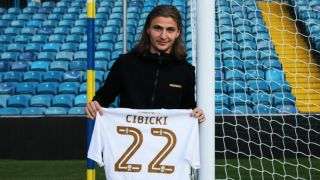 The Championship club, who lost last season's top scorer Chris Wood to Burnley this month, have handed the 23-year-old a four-year-deal at Elland Road.

Cibicki scored 12 goals in 30 starts for Malmo and has represented Sweden Under-21s, having played for Poland at U19 and U20 level.

Leeds have made an excellent start to the campaign under Thomas Christiansen to sit third in the table, unbeaten after five matches.