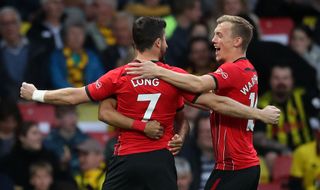 The Republic of Ireland striker fired his side ahead after 7.69 seconds at a stunned Vicarage Road.

But his first-minute goal was cancelled out by a last-minute one from Andre Gray as Watford secured a 1-1 draw.

The strains of Sir Elton John’s ‘Rocket Man’ had barely finished booming over the loudspeakers when Long gave Southampton lift-off.

Amazingly, the goal actually came from Watford’s kick-off. Roberto Pereyra played the ball from the centre-circle back to defender Craig Cathcart some 40 yards from his own goal.

As Cathcart attempted to launch the ball up field, Long charged it down and raced through before lifting it over Hornets goalkeeper Ben Foster.

The goal was a fraction more than two seconds quicker than the Premier League’s previous fastest, scored by Tottenham’s Ledley King after 9.82 seconds against Bradford in December 2000.

As well as writing a little piece of history for himself, and becoming an answer to a pub quiz question, Long must have thought he had all but guaranteed Southampton’s survival until Gray struck.

Had they held on, Saints would have been eight points clear of Cardiff, who sit in the final relegation spot and have just three matches remaining.

As it is, the six-point gap should be plenty, with the mission of Ralph Hasenhuttl, the manager brought in to save them from relegation, almost complete.

Southampton are a shadow of the side that looked to be sleepwalking towards the drop under Mark Hughes, and they constantly worried FA Cup finalists Watford with their relentless pace and pressing in a frantic first half.

They could have scored more with Nathan Redmond and Ryan Bertrand both hitting the woodwork.

Redmond was also denied by a good save from Foster and Long headed two other presentable chances off target.

Watford looked shell-shocked after that early blow, but they staggered back in to life and began creating opportunities.

The Hornets dominated after the break and Abdoulaye Doucoure attempted to convert a cross from Kiko Femenia but could only bundle the ball into Gunn’s arms.

Christian Kabasele felt he should have been awarded a penalty after a shove by Long in the area, but referee Mike Dean thought otherwise.

Deulofeu’s cross was cleared from under the crossbar by Maya Yoshida and Foster saved a point-blank Isaac Success shot.

But Saints could not hang on and Gray swept home from close range to lift Watford up to seventh and keep Hasenhuttl’s men looking over their shoulders a little longer.