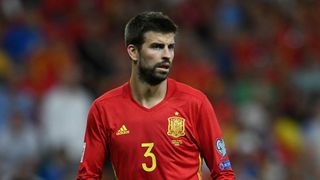 Julen Lopetegui had no hesitation in including Gerard Pique in his latest Spain squad, despite the Barcelona defender's latest social media post.

On Thursday, Pique tweeted his backing for Catalan independence and called for peaceful expression of opinions ahead of the planned referendum this weekend.

Pique has long been a supporter of the region breaking away from Spain and that has occasionally seen him heckled by his own fans while on international duty.

It is not something that bothers Lopetegui, though, who named the 30-year-old in his 25-man squad for qualifiers against Albania and Israel.

"Pique will train with us and I cannot say anything more about that," he told a media conference.

"Gerard gives his all when he comes to play with us. I have no doubt with [the commitment] of Pique.

"We are not going to let anything or anyone distract our attention from these matches."

Lopetegui has made some changes to his squad for the final two matches of Group G, with Spain three points clear of closest challengers Italy.

Forwards Rodrigo and Jose Callejon are both named ahead of Gerard Deulofeu and Vitolo, while Asier Illarramendi's impressive early season form for Real Sociedad sees him recalled.

There is no place for David Villa, though, despite returning to action for New York City after suffering an adductor injury on his international return last time out.