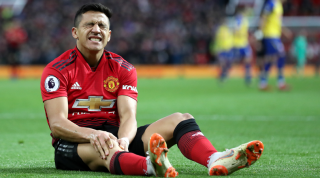 Alexis Sanchez's transfer to Manchester United two years ago might go down as the worst in United's history. It's certainly one of the most expensive.

Now, the Red Devils look set to finally get the Chilean off their books, with a permanent move to Inter Milan imminent. According to Italian sports paper Gazzetta Dello Sport (one of those pink papers James Richardson used to flourish outside cafes on Football Italia), Inter will pay Sanchez around £13.5m over three seasons, and plan to unveil the signing following their Europa League game against Getafe on Wednesday night.

Sanchez has been on loan at Inter for the past season, during which he has scored more league goals (four) than he managed in a year-and-a-half in Manchester (three).

But United have still been saddled with much of Sanchez's wages over this period, because of the exorbitant amount he has been earning at Old Trafford. They agreed to pay over the odds for the winger when they signed him from Arsenal in January 2018 in order to steal him from under the noses of rivals Manchester City.

Back then, it was delivered as a big win for United, and supposedly a sign they were back to their old selves under then-manager Jose Mourinho.

Despite a goal that prevented Manchester City securing the 2018 title in the Manchester derby, Sanchez consistently underperformed in a United shirt.

It looks as though Ole Gunnar Solskjaer will be immediately putting the money saved to use: rumours are flying that Jadon Sancho has been offered around £300,000-a-week to move to Old Trafford.