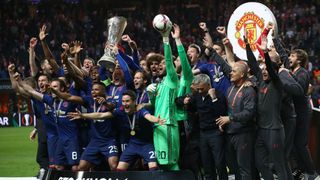 Alex Ferguson believes Manchester United winning the Europa League was a "lift" to the people of Manchester after Monday's deadly terror attack.

Players dedicated United's 2-0 win against Ajax in Wednesday's Stockholm final to the victims of the Manchester Arena bombing, which killed 22 people after an Ariane Grande concert.

United and Manchester City have pledged to donate £1 million to support the victims and their families and Ferguson hailed the strength of the city's people, citing the example of the 1996 Arndale Centre bombing as an example of how Manchester can recover from the attack.

"First of all, Manchester is a city like [Ferguson's home town] Glasgow, it's a working-class city with fantastic people and they'll get together," former United manager Ferguson told Sky Sports.

and Man City have come together to pledge £1 million to the We Love Manchester Emergency Fund: May 25, 2017

"They've been through some difficult times in the past with the bombing of the Arndale Centre in 1996 and they recovered from that. They'll get together because they're working class and there's a great unity in the city.

"Last night United gave the city a lift. That's what it was about. We're all proud of them, it was a great achievement."

Ferguson was speaking at an event to mark the 50th anniversary of Celtic winning the European Cup in Lisbon under Jock Stein, an achievement he does not think could be repeated again.

"They were the first British club [to win it] obviously, that set the path," Ferguson said. "For a period, particularly Manchester United, then did it.

"But they were the pioneers, doing the impossible. It was an amazing achievement and the expectation rose, winning the [Scottish] Cup against Dunfermline, to create the side that he did, Jock was unbelievable. So it'll always be regarded as the greatest football feat."

"Sir Matt [Busby] was rebuilding the United team after the Munich air disaster and he got the the semi-finals with a very young side, which was a great achievement," Ferguson continued. "But for Celtic to do it with players who were all from within about 25 miles of each other, it's really astonishing.

"It's brilliant to recognise the achievement and also applaud what the players and staff managed to do. It'll never be done again, there's absolutely no doubt about that."