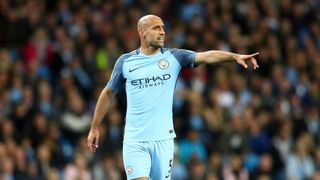 Manchester City all-but secured a top-four spot in the Premier League with a stylish 3-1 win over West Brom as the Etihad Stadium faithful came out to honour departing club great Pablo Zabaleta.

City announced over the weekend that Zabaleta would end a nine-year spell in Manchester when his contract expires at the end of this season and Tuesday's final home match of the campaign was soundtracked by chants paying tribute to the Argentina international.

Manager Pep Guardiola did not stay entirely on message, naming the right-back among the substitutes, but a flowing first-half performance, featuring two goals in quick succession from Gabriel Jesus and Kevin De Bruyne, headed off any potential discontent as Sergio Aguero led the line superbly.

Yaya Toure, another crowd favourite out of contract next month, got on the scoresheet before Zabaleta received a heroes' welcome and another substitute, Hal Robson-Kanu, netted West Brom's consolation

Only defeat at Watford on the final day for third-placed City, along with Liverpool and Arsenal enjoying significant goal difference swings in victory, can now stop Guardiola's men from returning to the Champions League.

Leroy Sane deftly nutmeged Allan Nyom and had penalty appeals dismissed when taking a tumble as the full-back looked to recover his ground, while Ben Foster was at full-stretch to keep out Aleksandar Kolarov's 30-yard free-kick.

Sane was heavily involved as City chased the breakthrough and the Germany international should have done better than dragging a bouncing shot wide when Aguero played him through in the 17th minute.

Aguero was artfully involved when City opened the scoring – cleverly backheeling Toure's drilled pass into De Bruyne's path and the Belgium star clipped across goal to leave Jesus with a simple finish.

It was two goals inside two minutes before the half hour when West Brom failed to clear their lines and De Bruyne expertly dispatched a bouncing ball from the edge of the box.

Aguero fired a half-volley at Foster from a similar position six minutes from half time and Sane crashed over, with City carving their opponents apart at will.

The West Brom goalkeeper palmed a dangerous De Bruyne ball out of his goalmouth early in the second period as a Zabaleta warm-up drew roars.

Albion substitute James McClean announced himself with an untidy challenge on Fernandinho inside the box that escaped punishment before another of City's long-serving stars put the result beyond doubt in the 57th minute.

The driving runs of old are scarcely a feature for Toure nowadays but he strode regally forward to exchange passes with Aguero and slot in a low finish.

It was then time for Zabaleta to arrive to fervent acclaim that continued every time he touched the ball.

If Zabaleta is a symbol of City's fondly remembered recent past, Jesus is the man seen by many as their brightest hope for the immediate future. The 20-year-old Brazilian brilliantly danced away from three West Brom defenders and forced Foster to push over in the 68th minute.

Club captain Vincent Kompany, who also joined City in 2008, was replaced in the 77th minute and handed the armband to Zabaleta with a warm embrace, while Toure was also rapturously applauded late on as he made way on what might also be his curtain call.

Robson-Kanu tapped in Nyom's cross with three minutes to play before Zabaleta was symbolically announced as man-of-the-match at a stadium where he will be dearly missed.