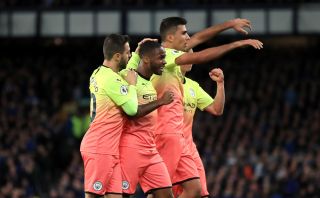 Gabriel Jesus put City ahead at Goodison Park but the hosts did not look like a side that had lost three of their last four Premier League games and hit back through Dominic Calvert-Lewin.

Both sides then had further chances but it was City who secured the points after Mahrez beat Jordan Pickford with a low free-kick and Sterling struck via the woodwork.

The result ensured City remained five points behind leaders Liverpool, a relief after a difficult week.

After several days in the headlines following a controversial tweet by Bernardo Silva, City’s players – including the Portuguese – warmed up in T-shirts supporting anti-discriminatory body Kick It Out. This was part of an initiative by Everton, who unfurled a banner in support of their forward Moise Kean, a player who suffered racial abuse while at Juventus last season.

Bernardo Silva, along with David Silva and Sergio Aguero, began on the bench as City boss Pep Guardiola rotated his squad.

Everton handed a first start of the season to Theo Walcott but his involvement lasted little more than a minute as he suffered a nasty head injury in the opening exchanges.

City had gone straight onto the attack, with Mahrez testing Pickford from distance. Sterling tried to whip the ball back in but Walcott took the cross flush on the head.

He fell to the ground immediately and could not continue. He left the field on a stretcher, heading straight to hospital for assessment.

City should have taken the lead when Mahrez fizzed in a low cross to the far post but, remarkably, Ilkay Gundogan hit the bar from three yards.

The visitors continued to control the game and claimed the lead after 24 minutes following another quick raid by Mahrez. The Algerian passed inside to Kevin De Bruyne and the Belgian delivered a typically inviting cross for Jesus to head home.

but City were soon back on the attack with Sterling playing in Mahrez for another effort on goal.

Gundogan then shot at Pickford but Everton were unbowed and fought back to level as Walcott’s replacement, Alex Iwobi, got the better of Fernandinho to tee up Seamus Coleman.

The Irishman beat Ederson with a delightful chip but he did not get the credit for the goal as Calvert-Lewin dived in to snatch it.

City responded well, with Jesus blasting wide and Gundogan testing Pickford, but there was a moment of ill temper as Sterling became involved in a scuffle with Yerry Mina.

Gundogan missed another chance early in the second half and De Bruyne hit the side-netting before Everton almost snatched the lead as Mina forced Ederson to tip over.

Sterling spurned a glorious chance to put City back ahead when he was put through on goal by Mahrez and slid his shot wide.

It was beginning to look like a laboured night for City but Mahrez provided the spark they needed as he curled a low free-kick into the bottom corner.

It was a moment of quality but Pickford was slow to react, inviting more unwanted scrutiny on the England keeper after his performance in the defeat at Sheffield United last week.

Everton had two chances to equalise but Ederson did brilliantly to deny them, first reacting quickly after Calvert-Lewin went through and then palming wide a Mina header.

They were to prove costly misses as Sterling secured the points six minutes from time when he smashed a shot against the bar that bounced down over the line.