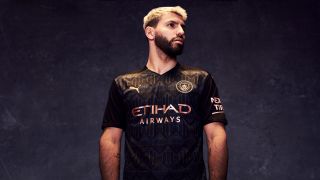 PUMA has today unveiled the away kit for Manchester City to be worn throughout the 2020/21 season.

According to the official release, the new away shirt features "a pattern inspired by Castlefield and the Bridgewater canal, an area symbolic of Manchester’s past, present and future."

“With this kit we wanted to celebrate the culture of the city,” said David Bremond, of Puma. "We wanted the jersey to feel special and unique to fans, and celebrate Manchester’s rich culture."

Even fans that aren't local to Manchester or architecture aficionados will appreciate the design, which resembles a really swish Moroccan rug that would tie any room together. The gold on blue and black is a really decadent choice and, for anyone who isn't a huge fan of the "swimming pool" home kit, this is surely the one to go for.

The kit is complete with black shorts and dark blue socks. It all be debuted in City's remaining Champions League games this season. Guardiola's side host Real Madrid in the last-16 second leg on August 7.