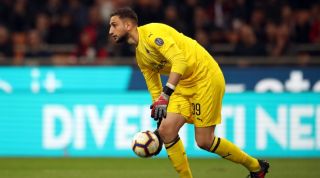 The Old Trafford number one’s future is in doubt as he enters the final year of his contract with talks over an extension making no progress.

The Daily Mail reports that Argentina international Romero, who joined the club from Sampdoria in 2015, is likely to be entrusted with a starting role in the case of De Gea’s sale.

PSG are monitoring the situation after the Spain international came under criticism following an error-plagued end to the 2018/19 campaign.

The report suggests that United have looked at the possibility of replacing him with Everton’s Jordan Pickford, Barcelona’s Jasper Cillessen or Ajax’s Andre Onana, but Romero is more likely to be Ole Gunnar Solskjaer’s first choice.

However, reports in Italy say that Milan stopper Donnarumma could be in United’s sights.

Gennaro Gattuso’s side are currently fifth in Serie A and relying on other results going their way on the final day of the season to secure Champions League qualification.

Calciomercato claims that if the Rossoneri fail to clinch a top four finish, Donnarumma’s agent Mino Raiola could agitate for a sale.

United and PSG are said to be tracking the situation, with the outlet claiming that a bid in the region of £53-62 million could convince the Italians to sell.