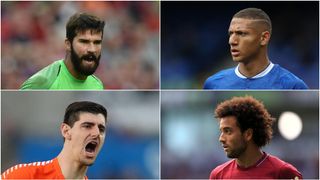 Premier League clubs were scrambling to complete deals before the end of the transfer window on Thursday, with teams including Fulham and Everton among the most active.

A change to the timing of the window meant deals had to be wrapped up before the start of the season on Friday and left clubs scrambling to complete transfers.

Fulham secured an incredible five new players on deadline day itself to wrap a bow on top of what was an impressive window for the Cottagers, while Jose Mourinho will be unhappy with Manchester United's lack of late business.

Even United's inability to get a deal over the line was outdone by Tottenham, though, as Mauricio Pochettino's team did not complete a single signing over the whole transfer window.

United and Leicester City get 2018-19 up and running at Old Trafford on Friday, but who were the winners and losers of the transfer window?

Champions League finalists Liverpool have arguably had the best transfer window of any Premier League club - they have certainly spent the most. Sealing a deal with RB Leipzig for Naby Keita in January gave the Reds an early boost and they added both quality and depth to their squad. Breaking the world-record fee for a goalkeeper to sign Alisson from Roma was a statement of intent that provides a gigantic upgrade on the hapless Loris Karius, while Fabinho's arrival from Monaco covers the loss of Emre Can to Juventus. Xherdan Shaqiri will provide match-winning ability from the bench while the squad was trimmed by the departures of Danny Ward and Danny Ings. Jurgen Klopp should now have the tools to push hard for honours in all competitions.

Promoted clubs Fulham and Wolves have each made eye-catching signings, with the London side adding 12 new faces. Jean Michael Seri is a genuine coup, the midfielder having seemed set to join Barcelona from Nice in January, while another Ligue 1 signing - Andre-Frank Zambo Anguissa from Marseille - adds extra quality in midfield. Aleksandar Mitrovic's goals fired Fulham to promotion and Slavisa Jokanovic will hope his fellow Serb will come up trumps again, while Andre Schurrle and Luciano Vietto add more goal threat. Fulham even pipped Burnley to Swansea City defender Alfie Mawson. Fulham should survive, but Wolves could thrive. An already strong Portugal presence has been bolstered by the signings of internationals Joao Moutinho and Rui Patricio, while the club's transfer record was broken to bring in Adama Traore from Middlesbrough. Strikers Benik Afobe and Raul Jimenez offer options up front, while Diogo Jota's successful loan has been converted into a permanent deal after he lit up the Championship with 17 goals.

Everton spent big last season without success but their signings look smarter this time. A deadline day double deal with Barcelona for Yerry Mina and Andre Gomes offers excitement - they join former team-mate Lucas Digne at Goodison Park - while Brazilians Bernard and Richarlison add plenty of flair in the final third. A bloated wage bill has been cut by Wayne Rooney, Davy Klaassen, Ashley Williams and Ramiro Funes Mori all leaving and new boss Marco Silva will be under pressure to succeed.

Similarly, there has been more heavy investment at West Ham, with the capture of Felipe Anderson smashing the club's transfer record and looking like one of the deals of the window. Ukraine international Andriy Yarmolenko is a huge talent while Issa Diop, a giant defender from Toulouse, appears  tailor-made for the Premier League. Lucas Perez represents a punt but if fellow ex-Arsenal man Jack Wilshere can stay fit, he has the potential to take the Hammers to a new level, and Colombia international Carlos Sanchez arrived on deadline day.

Mourinho spent much of the close-season complaining - about everything - and his board's failure to land any first-team signings other than Brazil international Fred looks set to be a bone of contention for the Manchester United manager. Days before the window closed, Mourinho was still hoping for two new signings, with players including Ivan Perisic, Toby Alderweireld, Willian and Harry Maguire reportedly targets. But none came in and Mourinho will have to work with the players he has, including Anthony Martial, who drew the ire of his manager by failing to make a swift return to the club's United States tour after the birth of his child.

With no signings at all, it has been a frustrating time for Tottenham manager Mauricio Pochettino. It was not all bad news as star striker Harry Kane signed a new six-year deal early in the window, while there were no significant departures from a squad that is full of some of the hottest young talent in Europe. Pochettino made it clear he expected arrivals, though, and although the Argentine will understand the tightening of the budget is necessary due to the stadium upgrade project at White Hart Lane, a couple of quality new players could have pushed Spurs on to be contenders at home and abroad.

Farcical scenes at Chelsea at the start of pre-season saw Antonio Conte take training despite everyone knowing his sacking was imminent. The Italian's successor Maurizio Sarri was able to tempt Jorginho to follow him from Napoli, rejecting interest from champions Manchester City, but a transfer saga involving goalkeeper Thibaut Courtois has overshadowed the first few weeks of his reign. Courtois eventually forced through his move to Real Madrid and Chelsea then had to break Liverpool's world-record fee for Alisson to sign Kepa Arrizabalaga from Athletic Bilbao for €80million. Kepa may prove a world-class goalkeeper but on paper Chelsea have made a significant outlay to sign a weaker goalkeeper, while even as backup the arrival of Rob Green looks a touch desperate.

Arsenal also missed out on Champions League qualification last term and none of their signings look likely to return the Gunners to the top table, although new head coach Unai Emery could squeeze more from his squad than outgoing veteran manager Arsene Wenger. Experienced full-back Stephan Lichtsteiner adds grit, but Sokratis Papastathopoulos and Bernd Leno do not look like significant upgrades. Uruguay international Lucas Torreira is a smart capture in midfield, but more stardust was required.

Rafael Benitez has been the most frustrated manager in the Premier League, with Newcastle United continuing to operate under difficult financial conditions despite a top-half finish in 2017-18. Mitrovic was allowed to leave, with further funds brought in by the sales of Mikel Merino and Chancel Mbemba. But Benitez was given precious little cash to spend, although Federico Fernandez came in from Swansea on deadline day to address the loss of Florian Lejeune to a cruciate injury. Fabian Schar could prove a bargain, but Mainz striker Yoshinori Muto looks a gamble and Benitez would have wanted Salomon Rondon on a permanent transfer rather than the Venezuela striker joining in a swap deal that sees Dwight Gayle depart. Benitez is in the last year of his contract at Newcastle and friction with owner Mike Ashley looks certain to continue.