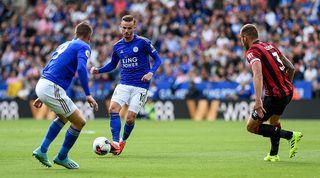 Maddison, 22, has had an impressive start to the season, scoring two goals and recording one assist in six games.

This follows a disappointing summer for the England Under-21s, who failed to progress from the European Championship group stage.

Manchester United have been tracking the midfielder for some time and Ole Gunnar Solskjaer is keen to add some creativity to his side.

Their stale showing against Arsenal on Monday night was a further indication of a need for midfield dynamism.

And with Pogba regularly linked with a move away from Old Trafford, United are thought to be keen on mitigating any exits in the near future.

However, Leicester City won't make it easy for any club trying to pry their prized asset from their grasp. Maddison has attracted interest from a number of top sides in the Premier League and it will take a big bid to win his services.

United are prepared to stump up £80 million for the young playmaker, according to the Daily Mail, which would be the same amount they paid for Maddison's former teammate Harry Maguire.

The Foxes will be expecting a big bid from the Reds, but are believed to be willing to cash in for the right amount.

It's believed, however, that Borussia Dortmund's Jadon Sancho remains United's top target – though he would cost north of the £100 million mark.

What exactly are Manchester United these days? Like, really?

The Greatest Goal I Ever Saw… Robbie Fowler vs Paris Saint Germain, 1997