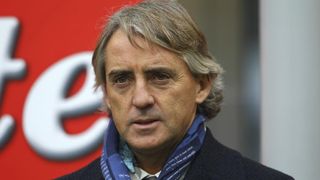 Inter coach Roberto Mancini insists there is no crisis at the club despite their recent run of poor results.

Since a 2-1 home defeat to Lazio over a month ago, Inter have only won once in Serie A, which has seen them relinquish top spot in the table.

Inter are now down in fourth and sit six points behind leaders Napoli, who are on a run five successive wins in the league.

A derby against rivals Milan awaits Inter on Sunday, and Mancini is confident his side can rediscover their early-season form.

"January is an odd month for everyone because of the transfer market, while it can happen during a season to have a momentary wobble," he said.

"It is a long campaign, we were top of the table until January 6, so we can recover comfortably.

"There is no crisis. We simply didn’t get the results we deserved. We lost some games in a strange way, as I have never experienced conceding two or three penalties on home turf in the final minute.

"Fortunately we are still near the top. Sunday is important, but not decisive. A win would help the team find more confidence and calm, but at the end of the day it is still worth only three points.

"We know [AC] Milan are in better form right now, but the derby is open to any result."

He added: "[Inter president] Erick Thohir is not like us Italians, who when losing one game don’t sleep and try to tear everything up. He knows there is a path and we need time, we are happy with what we have done so far.

"We are Inter and must aim for the top."