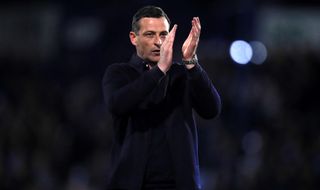 Martin Boyle says Hibernian manager Jack Ross has not had to serve up sweeping changes to his new side after being left a recipe for success by caretaker boss Eddie May.

But Boyle admits alterations to the team’s tactics have been kept to a minimum so far as the 43-year-old gets his feet under the table in Leith.

Instead, Ross has opted to stick by the two-striker system May introduced against St Johnstone in Perth last month.

It was the former Falkirk boss’ only game in interim command but saw Hibs end a 10-game Ladbrokes Premiership run without a win as they smashed Tommy Wright’s side 4-1.

Wideman Boyle expects Ross to put a bigger stamp on the Easter Road side as the months go on but reckons May’s tweak has, for now at least, corrected the major flaw that had previously held Hibs back this term.

He told HibsTV: “I didn’t think we were playing particularly bad under Heckingbottom. We just weren’t closing games out or scoring the goals we needed.

“Taking the chances was the main thing we needed to improve on.

“But all of a sudden the new manager has come in, we’ve picked up a bit and are winning games.

“He will want to tweak his own system and has his own ideas and I’m sure he will gradually start to apply that to the squad.

“We’ve been getting results but not much has changed since the game when Eddie May took over as the lads have been doing well.

“He’s not changed a lot around here, just bits and bobs in training and how we play with a fast build-up.

“The club always seem to get a lift when a new manager comes along. Everyone is fighting for a place.

“All the players have to try even harder to impress the manager and that’s what everyone has done.

“It’s never nice to lose a manager. You just have to adapt and get on with it. It’s not ideal but the new manager has come in to do his job and we need to get results on the field.”

Boyle has yet to force his way into Ross’ starting line-up but hopes he will get his chance when his side travel to Ross County on Wednesday night.

“All I can do is keep working hard in training and then make an impact when I come on and try to catch the eye,” he said.

“I’ve told the manager that when he needs me, I’ll be ready.

“I’m getting a lot of minutes under my belt and trying to make an impact when I can but there are other people on the bench and other people who can make a difference.

“If the team is doing well then it’s harder for me to get a shirt but if I’m given that chance I need to keep it.”