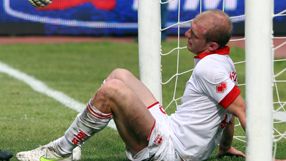 The 26-year-old, who is currently without a club, saved himself from an immediate custodial sentence after negotiating a plea-bargain arrangement at a magistrates court in Bari.

His associates in the scam Gianni Carella and Fabio Giacobbe, who bet on a number of fixed matches, were handed suspended sentences of 17 months.

Bari had already been relegated when they met Lecce, who were still fighting to avoid the drop to Serie B, and his suspicious own goal 10 minutes from time guaranteed them a 2-0 win.

Lecce were subsequently demoted for their involvement in the latest match-fixing scandal to engulf Italian soccer.

The "Calcio scommesse" (football bet) scandal also trapped Juventus manager Antonio Conte in its web and he is now serving a 10-month suspension from football.

Bari's last four matches of the 2010-11 season against Palermo, Sampdoria, Lecce and Bologna were all investigated, with matches against Treviso and Salernitana still the subject of examination.

Masiello's lawyer told the Italian media on Wednesday: "Andrea Masiello only wants to live peacefully and in total silence, and especially does not want to carry on being talked about.

"From a criminal law point of view the most important part has closed, and now there is a small part of the process left regarding two games: Treviso-Bari and Salernitana-Bari."

The case is the first major match-fixing scandal in Italy since the Calciopoli scandal of 2006 when Juventus were stripped of two titles and relegated for their involvement in it.