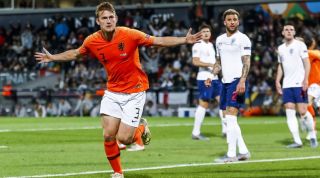 The Netherlands international, who scored in his country's 3-1 Nations League semi-final win over England on Thursday, has attracted the interest of Manchester United and Liverpool in the Premier League.

However, according to Radio Montecarlo, the champions of Spain and France are the only viable candidates who could sign the 19-year-old.

A report in ESPN FC says that PSG have emerged as favourites thanks to the efforts of former sporting director Leonardo, who is on the verge of a return to the club six years after his departure.

The Brazilian is currently finalising his return to the Parisian outfit and has been in regular contact with De Ligt’s agent Mino Raiola – currently serving a three-month suspension by FIFA.

De Ligt and Raiola are said to be convinced that PSG would be a good career move given the guarantee of regular game time, while the Ligue 1 side can also meet the financial demands involved in any move.

Signing the Dutchman could result in the sale of defender Presnel Kimpembe over the summer for around €40 million, while captain Thiago Silva’s departure is also a possibility.