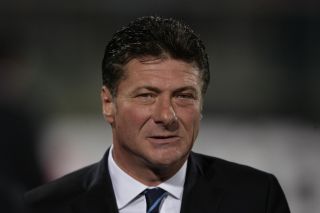 Mazzarri - who replaced Andrea Stramaccioni at Inter in May - has made a good start to his time at the club.

After finishing a disappointing ninth last term, Inter look to be revived under the former Napoli manager and they have posted successive wins against Genoa and Catania to start their season.

Their true test will come on Saturday though, as Juventus visit San Siro for the Derby d'Italia.

Juve have won the last two titles and have also posted back-to-back wins to start their season.

Mazzarri said: "The more pressure there is, the more up for it you are.

"We hope to give our fans lots to cheer about.

"We're focusing on ourselves. Inter v Juventus is always a highly anticipated match but however it goes tomorrow we'll still only have played three games."

Mazzarri also expressed his satisfaction at seeing hard work on defensive systems pay off on the pitch.

Inter have not conceded in all three of their competitive games this season and Mazzarri says they are slowly developing an excellent defence.

"We're careful defensively and developing our attacking game," he said.

"We can cause problems for anyone. The team's defensive work is crucial. We must remain compact but also think about hurting the opposition."

Inter have been handed a further boost with the news that Argentine striker Diego Milito is ready to return to his squad.

Milito, 34, has not played for Inter in a competitive match since injuring his knee in a UEFA Europa League fixture in February.

"He'll make the squad, yes. I want him in the group even though he's not at his best yet," Mazzarri said of the forward, who scored in a 2-2 friendly draw against Lugano on Saturday.