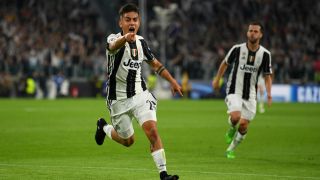 One of the Champions League's most unstoppable forces will meet its immovable object in the second of the semi-finals on Wednesday.

Serie A champions Juventus will take their formidable defensive record to France to face the scintillating attack of Ligue 1 leaders Monaco.

Massimiliano Allegri's side shut out Barcelona in the last eight and are the favourites to reach a second final in three seasons, but their free-scoring opponents are playing almost without pressure after surpassing expectations by reaching this stage.

Kylian Mbappe and Paulo Dybala have cemented their reputations as two of the finest young attackers in world football this season and will surely prove pivotal to their respective sides when it comes to settling a tantalising tie.

But where else might the two legs be won and lost? With the help of Opta, we look ahead to this week's first leg...

- This is the second time these sides have met in a Champions League semi-final. Juventus secured their passage to the final with a 6-4 aggregate victory 19 years ago before losing to Real Madrid in the final (1997-98).

- Juventus, alongside Real Madrid, are the only unbeaten team in this season's Champions League (W7 D3) and haven't conceded a goal for 531 minutes, the current longest run in the competition.

- Monaco have scored exactly three goals in each of their four Champions League knockout games this season. In fact, they are the first team in the competition's history to find the net at least three times in four consecutive knockout games.

- None of the two goals conceded by Juventus in this season’s Champions League have come from open play (10 games).

- Monaco have conceded 16 goals in the Champions League this season; more than any other team among the remaining semi-finalists.

- Kylian Mbappe, 18, is the joint-top scorer in this season's Champions League knockout stages alongside Cristiano Ronaldo, with five goals in four games. He is also the first player in Champions League history to score in each of his first four knockout games.

- Meanwhile, 21-year-old Thomas Lemar is the top assist provider in this season's knockout stages, with four. He's the first player to assist a goal in four consecutive knockout games since Andres Iniesta in May 2011.

- Radamel Falcao has scored 39 goals in the Europa League and Champions League since his debut in September 2009 against Chelsea; only Robert Lewandowski (41), Lionel Messi (77) and Cristiano Ronaldo (85) have more European goals (excluding qualifiers) in that time.