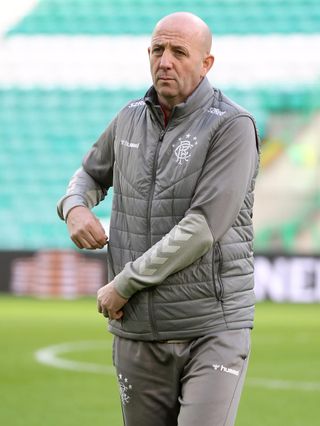 Rangers need to be “pretty perfect” for the rest of the Ladbrokes Premiership campaign as they attempt to end Celtic’s long title reign, admits assistant manager Gary McAllister.

But Steven Gerrard’s right-hand man insists there is no need for panic following Sunday’s 2-1 defeat to bottom club Hearts.

Rangers lost the edge in the title race gained in their Celtic Park win immediately before the winter break after squandering a lead to stay five points adrift of the champions with a game in hand.

“We need to be pretty perfect,” McAllister said. “We are well aware of that.

“We have a rough idea of the points tally that is required to be successful and there is very little wriggle room.”

Gerrard claimed his team were unrecognisable after Hearts recorded their third win of the league season.

And McAllister believes some more nous might have helped them hold on to the lead secured by Ryan Kent’s 47th-minute opener.

Speaking ahead of Wednesday’s visit of Ross County, the first in a trio of home games, McAllister said: “We had a good chat, went over a few things. The first thing is there’s no panic. We have been on a good run. I don’t think anyone saw it coming. As the manager said, we were pretty unrecognisable, we didn’t play and we didn’t compete.

“The players are well aware and the beauty is we have games coming up so we have not got a lot of time to dwell. We have got to push it to the backburner and move forward.

“In moments like this you have to trust what we have been doing. We can’t think because of one bad result it’s a shift or a massive change. The way the lads have played and the tactics have served us well.

“Having worked with the majority of these guys for 18 months, I know the type of person that’s in the dressing room. I think you will see a reaction.”

The former Scotland midfielder added: “The management question themselves as well – the preparation, the build-up, the due diligence that is done before every game. That was all put in place.

“First and foremost you have to say Hearts did pretty well, their game plan was good. And even though we didn’t play particularly well, I thought we had two or three good chances in the first half. And in a game where we didn’t play that well, we did get in the lead.

“So maybe a wee bit of recognition and experience would tell you that you can’t play brilliantly well every game, it’s not going to go your way every game. So when you recognise that, maybe play a different way.”

The defeat followed a 1-0 home win over St Mirren and a 2-0 William Scottish Cup victory over Stranraer which left Gerrard “bored”.

McAllister said: “If you look at the three performances, you would have to say we have not performed well since we came back. But I thought the winter break went well, I thought we worked hard and the boys did everything asked of them.”

Meanwhile, midfielder Ryan Jack looks set to miss the visits of County, Aberdeen and Hibernian at least after going off injured at half-time at Tynecastle.

McAllister said: “Ryan has had a little recurrence of a calf injury but we are hoping it’s not as bad as we first thought. They are talking 10 days to two weeks.”