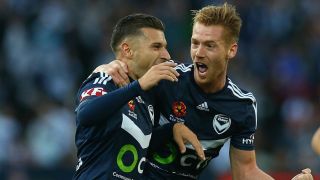 Brisbane suffered only their third defeat of the season in a miserable performance, with Kosta Barbarouses scoring a double along with strikes from Fahid Ben Khalfallah and Besart Berisha to give the hosts only a second win in eight league games.

Defensive mistakes gave the home team a dream start, with two goals in the first 11 minutes as Ben Khalfallah found the corner with a left-footed effort before Barbarouses raced clean through on goal for a simple second.

New Zealand international Barbarouses got his second and Victory's third on 30 minutes with an accurate header into the far corner and Berisha's 10th league goal of the season from close-range in the second half sealed a huge result.

Following their win, Victory move to within four points of the leaders, who will lose top spot on Saturday if Western Sydney Wanderers can get at least a draw against Sydney FC.