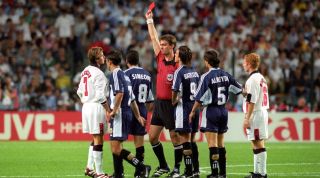 Michael Owen has criticised David Beckham for letting England down by getting sent off against Argentina at the 1998 World Cup.

The then-Manchester United midfielder was shown a red card for kicking out at Diego Simeone in England's last-16 tie.

And in his new book, Michael Owen: Reboot – My Life, My Time, the former England striker says Beckham's petulance cost Glenn Hoddle's side their place at the tournament.

"First of all, let me pre-empt what follows by saying that what David did probably wasn’t a red card offence in the first place," Owen wrote, as quoted by the Daily Mirror.

"While it was clearly pre-meditated, it was immature and petulant more than it was violent. But for me, that almost makes it worse. Had he stood up and just punched someone in the face, somehow the disappointment would have been easier to take.

"But because his flick-out was so childish, it also seemed so much more unnecessary. People will say it was just a mistake, but my feeling is that, if you want to win World Cups, you can’t afford to make mistakes. This is a tough world we’re living in. You’ve got to be bob-on with everything you do because the margins are tiny.

"All I can say is that, as I sit here now writing this book, knowing how lucky a player is to appear in one World Cup, never mind more than one, I’d be lying if I didn’t say that what David did that day hadn’t let every single one of that England team down.

"Did he deserve the abuse he got from the press afterwards? Certainly not. What human being needs to see his or her effigy being burned? But David let us down, and I still hold some resentment about it today."

Owen was involved in a Twitter argument with Alan Shearer on Tuesday as the former England strikers clashed over Owen's time at Newcastle.