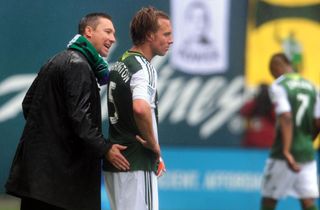 Portland's hopes of qualifying for the play-offs were dealt a blow last week after they were downed 4-2 by arch-rivals and Western Conference leaders the Seattle Sounders.

Sunday's loss left the sixth-placed Timbers with just four points from a possible 12 in the past month.

Portland will now travel to Vancouver, who occupy the fifth and final play-off spot in the West, with two points separating the two teams, though the Whitecaps have a game in hand.

The Colorado Rapids, in the midst of a six-game losing streak, are also in the play-offs hunt as they sit a point adrift of the Timbers ahead of their trip to Seattle on Saturday.

"It's a massive game," said Porter.

"It's looking like it's going to come down to us, Vancouver, Colorado… maybe San Jose creeps in for that fifth spot.

"You never know, one of those four may stumble, but we need points. Right now, Vancouver is two points ahead of us, so it's a chance to get above them with a result."

The Timbers will take confidence from Vancouver's form, which includes one win from eight previous outings with five draws and two losses.

Real Salt Lake, who could hand a debut to new designated player Sebastian Jaime, are third in the table, three points adrift of the Sounders.

Second-placed Dallas are also in action on Saturday as they travel to Chicago to face the Fire.

Dallas will enter the match as overwhelming favourites, having won four games on the bounce.

Only three points separate fourth-placed Toronto and New England, who are seventh in the standings.

The East's basement club, the Montreal Impact, are at home to the Columbus Crew.

On Sunday, MLS leading goalscorer Bradley Wright-Phillips will be out to continue his red-hot form for the New York Red Bulls against the East's pacesetters DC United, who were routed by the Los Angeles Galaxy midweek.

Wright-Phillips is the league's top scorer with 20 goals, while he became the first Red Bulls player to reach the mark in one season after finding the back of the net against the Impact last week.

DC United had no answer for the Galaxy, who were 4-1 winners on Wednesday, opening the door for Sporting Kansas City to potentially move top over the weekend.

As for the rampant Galaxy, who have won three games in succession to be just one point behind the Sounders in second position in the West, they are on the road on Sunday.

The Galaxy will take on cellar dwellers Chivas USA.