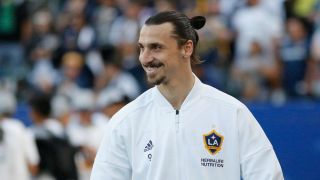 Zlatan Ibrahimovic scored twice for LA Galaxy but it was not enough as San Jose Earthquakes came back to earn a 3-3 draw in the California Clasico.

Former Manchester United striker Ibrahimovic notched a powerful opener after a minute, before driving a free-kick under the wall for his ninth goal of the season.

The 36-year-old Swede's sixth goal in his last four MLS outings put the Galaxy into a commanding 3-1 lead after 25 minutes.

But the Galaxy were pegged back by Valeri Qazaishvili, before Chris Wondolowski matched Ibrahimovic's double from the spot as the Western Conference's bottom side San Jose gained an important point.

Former Hull City player Adama Diomande was the hero, scoring a hat-trick for Bob Bradley's side as they continue to hold bragging rights in Los Angeles by staying third in the west.

Larrys Mabiala struck in the 87th minute as Portland Timbers edged past northwest rivals Seattle Sounders 3-2 to keep in touch with the leaders.

While the Sounders continue to languish towards the bottom of the Western Conference, the Timbers were boosted by leaders Sporting Kansas City going down 2-0 to Montreal Impact.

Elsewhere, Atlanta United continued their dominance of the Eastern Conference with a 4-0 win over lowly Orlando City.

Atlanta got off to a flying start as MLS top scorer Josef Martinez struck his 15th goal of the season after three minutes.

Miguel Almiron scored twice in the second half, either side of Ezequiel Barco's goal, as Gerardo Martino's men extended their lead at the top to six points following New York City's 3-2 defeat to Chicago Fire.

matches unbeaten vs Orlandogoalsmassive pointsWatch all the action again and again July 1, 2018

After an eighth successive defeat, Orlando will hope new coach James O'Connor can arrest their slump when he takes over from interim boss Bobby Murphy following the weekend.

Columbus Crew and New England Revolution recorded respective home wins over Real Salt Lake and DC United - unable to count on the presence of new signing Wayne Rooney, who did not make the trip.