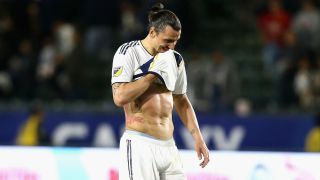 LA Galaxy suffered a dramatic collapse against Houston Dynamo to miss out on the MLS play-offs on a thrilling final day of the regular season.

After leading 2-0 with 30 minutes played, Dominic Kinnear's side surrendered their lead to lose 3-2 and miss out on a top-six finish in the Western Conference.

A victory would have been enough to see them finish above Real Salt Lake and they looked to be cruising to three points when Ola Kamara struck twice in three first-half minutes.

Romell Quioto got a goal back for Houston, who were already out of play-off contention, before Mauro Manotas levelled from the penalty spot on 73 minutes.

Manotas struck again six minutes later and, despite 10 minutes of injury time and a red card for Ronaldo Pena, there was to be no late salvation for Galaxy and Zlatan Ibrahimovic.

New York Red Bulls claimed the Supporters' Shield for the third time in six seasons after Derrick Etienne gave them a 1-0 win over Orlando City that put them top of the Eastern section on 71 points, two clear of Atlanta United, who were beaten 4-1 by a Lucas Janson-inspired Toronto.

Columbus Crew's 3-2 win over Minnesota United – thanks to a Gyasi Zardes hat-trick – kept them in the top six, although Montreal Impact would not have caught them anyway as they went down 1-0 to New England. Philadelphia Union finished sixth in the East, despite a 3-1 loss to New York City.

Chicago Fire and DC United drew 0-0, while Alphonso Davies scored twice to give Vancouver Whitecaps a 2-1 win against Portland Timbers in what is set to be his final match before he joins Bayern Munich in January.