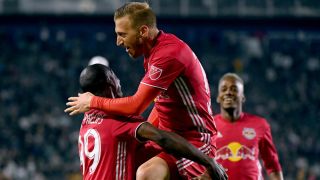 New York City, who were top of the east before kick-off, were unable to cope with the Red Bulls' energy – Bradley Wright-Phillips adding a third for the hosts 10 minutes before half-time.

Derrick Etienne Jr came off the bench and sealed the emphatic victory 11 minutes from the end as the Red Bulls enjoyed another rout of NYC, who were thrashed 7-0 in 2016.

The drubbing saw NYC drop down to second, two points adrift of Atlanta United, who were 2-1 winners at Chicago Fire.

Houston Dynamo scored a 90th-minute winner as they topped the free-falling Galaxy 3-2 on Saturday.

Ibrahimovic's Galaxy thought they had earned a point when Ola Kamara equalised with five minutes remaining but Jose Rodriguez's last-gasp winner condemned the visitors to their fourth loss in five games.

Giovani dos Santos had cancelled out Alejandro Fuenmayor's second-minute opener by rebounding Ibrahimovic's saved shot in the first half, only for Romell Quioto to restore Houston's lead two minutes after the break.

The Galaxy rallied again late in the match but the Dynamo were not to be denied on home soil.