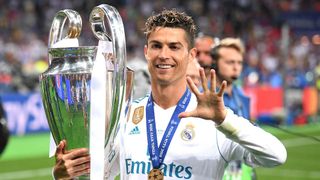 Luka Modric expects Cristiano Ronaldo to stay at Real Madrid, despite widespread reports linking him with a move to Juventus.

The 33-year-old has been tipped to join the Serie A champions in a deal worth in the region of €100million, with agent Jorge Mendes suggesting Ronaldo could be tempted to leave the Spanish capital in pursuit of a new challenge.

Modric, though, hopes the five-time Ballon d'Or winner commits to a 10th season with the European champions and admits he find it hard to imagine Ronaldo at another team.

"I think he's going to stay," said Modric, as quoted by AS.

"That's my opinion. It would be very good if he stays because I can't imagine him at another European team.

"I'd like him to stay because he's the best player in the world. He means a lot and hopefully he'll stay. We'll see what happens."

Juventus' share prices skyrocketed amid the Ronaldo reports, with the club later issuing a statement in which they said they were "evaluating several opportunities" in the transfer market.

Ronaldo's exit would reportedly encourage Madrid to pursue deals for one of Paris Saint-Germain stars Kylian Mbappe or Neymar.

85 - Cristiano Ronaldo has now scored more international goals than any other European player in the history of football (85 goals for Portugal). Historic. June 20, 2018