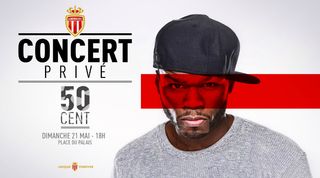 Monaco are on the verge of winning their first French top flight-title in 17 years, and need just a point against Saint-Etienne on Wednesday night to make it mathematically official ahead of Paris Saint-Germain.

Video: Swiss midfielder scores one of the best own goals you'll ever see

Radamel Falcao, Kylian M'Bappe & Co. are expected to do the business against the eighth-placed club, but Monaco have gone ahead and secured the services of American rapper 50 Cent ahead of their private party on Sunday.

The club from the affluent French principality made the announcement on Twitter, saying: "50 Cent will come to celebrate the excellent results of Falcao’s team-mates this Sunday in the Palace Square in the Principality.

"The players and staff of AS Monaco will be present this Sunday to attend the private concert of the American star."

But you won't be, peasants.

Anyway, you can hardly blame them: it's near-impossible for PSG to pip them to the title, thanks to Monaco's superior goal difference of 17 with just two games to go. Rightfully, there's a feel-good vibe in da club.