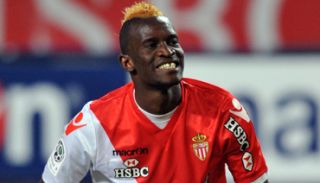 Toure (pictured) scored in the fifth minute of stoppage time to help Monaco open up an unassailable lead in Ligue 2 with two games remaining.

Fourth-placed Angers are 10 points adrift while fifth-placed Caen, who could have been a threat as they have a game in hand, cannot make up the ground as they are 11 points adrift.

The top three teams in the league are promoted to Ligue 1.

Monaco, who were bought last season by Russian oligarch Dmitry Rybolovlev, will be aiming to compete with wealthy Qatari-backed Paris Saint-Germain when they return to the top flight next season following a two-year absence.

The 2004 Champions League runners-up have spent millions of euros to lure players to the club despite playing in Ligue 2 and have been coached by former Juventus and Chelsea manager Claudio Ranieri.

According to recent media reports, Monaco are interested in signing Atletico Madrid striker Radamel Falcao, who has also been linked to Chelsea.

Monaco are also at odds with the French League (LFP) and Federation (FFF) after being ordered to move their headquarters to France in order to end tax exemption for the club's players.

A meeting with the FFF, the LFP, the club's union and Monaco management has been planned for May 22.

Monaco have threatened to take legal action if a resolution cannot be reached to settle the issue.