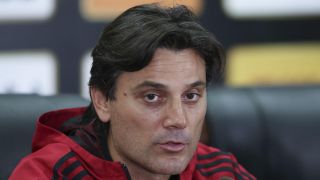 Vincenzo Montella insists AC Milan are "fired up" for a tough run of fixtures, beginning with Sunday's trip to Sampdoria.

But the pace being set at the top-flight summit is fierce, with Napoli and Juventus preserving 100 per cent records on Saturday, while Milan's only encounter with a team in the top half ended in a 4-1 loss at Lazio.

After what Montella believes will be an "emotional" encounter with his former club Samp in Genoa, Milan host Roma and take on Inter in the first derby of the campaign after the international break.

Juventus visit San Siro before the end of October and Montella wants to see a new level of performance this weekend.

"This is the game where we can raise the bar, as all the next fixtures are all very tough – games like the Milan derby, Roma, Juventus and Napoli," he said.

"This is the first of a tricky run. The team is fired up and motivated, as we hoped for such a strong start to the season.

"It's an extremely complicated and difficult match, as Sampdoria are tactically strong. We must be quick and organised, with mental sharpness.

"Samp defend well, so we have to spread the play and create passing channels."

Montella also praised the influence of centre-back and captain Leonardo Bonucci – Milan's showpiece close-season signing from Juventus – upon the group.

"We expect a great deal from the more experienced players like Leonardo Bonucci and Lucas Biglia," he said.

"They set the example, both on and off the field, and can lead the younger members of the team."