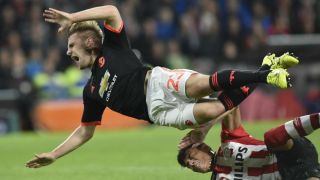 Moreno's challenge in the 15th minute of the Group B clash prompted seven minutes of treatment, with Shaw eventually withdrawn on a stretcher while wearing an oxygen mask.

United subsequently confirmed the left-back suffered a double fracture in his right leg and will now fly back to Manchester for an operation.

"This happened to me as well during the World Cup [vs Netherlands]. I want to wish him all the best, but it wasn't my intention to injure him. I'd rather had it didn't happen."

His sentiments were echoed by PSV head coach Phillip Cocu.

"I felt very bad of course," said Cocu. "It's a very bad injury. He's a great player, important for the team, and whenever any player goes off with this kind of injury it's unfortunate. Even our players were affected by it."

Cocu refused to be drawn on whether it was a poor challenge from Moreno, who went unpunished as referee Nicola Rizzoli opted not to award a penalty.

"It was not possible to see at the moment because there were a lot of players in the way," he said. "The one thing I saw was that the ball went in a different direction so he got something on the ball but I feel sorry for Luke."

Cocu could at least take heart from a fine win for his side, with goals from Moreno and Luciano Narsingh overshadowing Memphis Depay's opener to earn the points.

He added: "I'm very happy, especially with coming from 1-0 down.

"We did well on the wings and took a lot of pressure from them. We stayed organised so they didn't have many chances and the fans were great. Those last 10 minutes were a great feeling."

Moreno added: "It was nice to score a goal. I promised my family and my girlfriend that I would score and now this has happened."