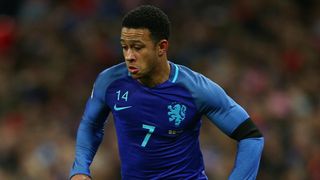 Quincy Promes scored once and set up another as 10-man Netherlands held on to record a 2-1 away victory over Morocco in Agadir.

Interim boss Fred Grim was in charge before Dick Advocaat begins his third spell at the helm and he had to cope without key players Daley Blind, Arjen Robben, Kevin Strootman and Georginio Wijnaldum.

But after handing a debut to Chelsea defender Nathan Ake, Grim saw Promes put the visitors ahead in the first half following great work from Memphis Depay.

Promes set up Tottenham striker Vincent Janssen to double Netherlands' lead after the break with his fifth goal in 10 international starts, a strike that looked like it would ensure victory.

But the Dutch had to hold on in a nervous finish to the contest after Matthijs de Ligt became their youngest-ever player to be sent off, with Mbark Boussoufa scoring from the resulting free-kick.

Netherlands, whose return to form is welcome after they had won just once in five matches, are back in action with a home friendly against Ivory Coast on Sunday, before they meet Luxembourg in World Cup qualifying on June 9.

1 - The Netherlands are playing their first game on the African continent since the 2010 World Cup final. Flashback. May 31, 2017

They took the lead after 22 minutes, Depay showing superb skill down the left in beating Nordin Amrabat and laying a pass back into the path of Promes to side-foot in with a first-time finish from 10 yards.

Janssen forced a double save from home goalkeeper Munir Mohamedi when he lashed a shot towards the near post from a tight angle before following up with a headed attempt on the rebound.

In a rare Morocco chance, Manuel da Costa could only send his header over the bar as he latched on to a free-kick from Faycal Fajr.

But a second Dutch goal looked more likely, with Janssen again denied by Munir after working a shooting opportunity for himself shortly before the break.

Morocco made a better start to the second half, with Sofiane Boufal cutting inside from the left and producing a tremendous diving save from Jeroen Zoet, Da Costa heading over from the resulting corner.

Fajr fired straight at Zoet from 20 yards as the hosts pushed hard for an equaliser, but their hopes of a comeback appeared to be over when the Dutch struck against the run of play with 22 minutes remaining.

Promes dinked in a cross from the right and Janssen was afforded time to chest down in the box and prod in with a right-footed finish.

But the match was suddenly thrown back in the balance when De Ligt was sent off for bringing down Walid Azaro just outside the box as he prepared to race through on goal and Boussoufa stepped up to find the bottom corner from the free-kick, with Zoet rooted to the spot.

Netherlands, though, survived late pressure to hold on for victory in their first match since Danny Blind's sacking.