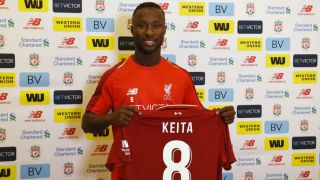 Naby Keita hopes his patience pays off as he prepares to officially become a Liverpool player on Sunday.

While his transfer from RB Leipzig was confirmed last August, the Guinea midfielder will finally join the Premier League side on July 1 ahead of the start of pre-season training.

Keita was a transfer target for Liverpool a year ago and had to watch on from afar as Jurgen Klopp's squad not only secure a second successive top-four finish in the Premier League, but also reached the Champions League final.

The 23-year-old admitted he became "motivated" to make the move to Anfield after discussions with Klopp and Sadio Mane, who will miss his new team-mate's first day due to Senegal's presence at the World Cup.

"When you see how they performed last season it makes me want to do the same and to be a part of this team," Keita told the club's website.

"I would like to be able to achieve a similar kind of season with them next season – but even better.

"I chose Liverpool because it is a team I watched often - and I also spoke a lot about it with Sadio [Mane]. He told me a lot about the team and the club.

"I also spoke with the coach, who told me about the project for the team and that motivated me to be here."

Liverpool have confirmed Keita - who enjoyed productive two seasons in the Bundesliga after his arrival from RB Salzburg - will wear the number eight shirt.

He is the first player to do so since the departure of Steven Gerrard in May 2015 - and Keita revealed he was presented with his new jersey during a meeting with the club legend last year.

"When it happened, it was a surprise and I didn't expect it," he said.

"When he came in, I looked and him and said, 'wow' because he is a legend. He is somebody who always showed respect, who gave his all on the pitch, somebody who is loved here.

"If somebody like that gives you his shirt number, it's not to play around with, it is to try and do as much as he did – that's my motivation."

As well as Keita, Liverpool's squad will also welcome Fabinho - the Brazil midfielder signed for €50million from Monaco - when they return to duty on Monday.