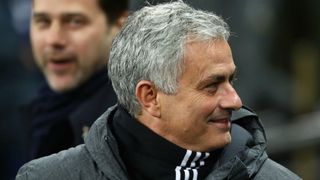 Jose Mourinho has outlined his 2020 vision for Manchester United as he plans to guide the club to a position where they are challenging on all fronts within two years.

The Portuguese watched on at Wembley on Wednesday as his side were comprehensively outplayed in a 2-0 loss to Tottenham, who opened the scoring inside 11 seconds through Christian Eriksen.

Phil Jones' calamitous own goal shortly before the half-hour had United chasing the game and they were unable to turn the tide as Manchester City opened up a 15-point lead atop the Premier League thanks to their 3-0 win over West Brom.

That gulf may have some United fans worried about a period of City dominance under Pep Guardiola, but his old adversary Mourinho, when asked where he sees his side in 2020, responded in typically bullish fashion.

"We've got to pick ourselves up and go again."Ashley Young spoke to after a disappointing night for . January 31, 2018

"Better than now," he told BT Sport. "Fighting for what we are fighting for now but with different ammunition.

"I see us being real contenders for everything, that's the level we want to achieve."

Despite arriving in Manchester in May 2016, Mourinho is still residing in the city's Lowry Hotel rather than seeking more permanent accommodation, and the Portuguese moved to dispel talk that his living situation is having an adverse affect on his demeanour.

"People don't share with me the intimacy of the inside doors. I think I am a funny guy sometimes, maybe with some silly jokes or something like that," he said.

"Press conference, I don't like it. Football matches, I am focused on the match.

"Pre-match [and the] after-match interview is still part of the pressure of the game so maybe people get it wrong.

"The paparazzi that sleeps in the door of the Lowry Hotel, he sees me in the morning when I am sleeping, he sees me later when I am going back and I am tired. He is there 24 hours a day but he cannot get a nice picture."