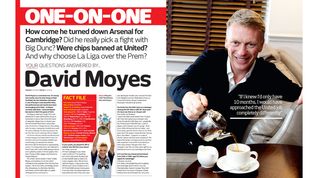 The former Preston North End, Everton and Manchester United manager, now in charge of Real Sociedad in Spain, started out as a centre-back for Celtic in 1980, making 24 league appearances in three years with the Bhoys.

Moyes would later ply his trade for Cambridge, Bristol City, Shrewsbury, Dunfermline, Hamilton Academical and Preston before beginning his coaching career with the latter at Deepdale. However, things might have turned out much differently had he opted to join the Gunners in 1983.

Asked in a One-on-One interview in the March 2015 issue of FourFourTwo if it's true he came close to moving to Highbury instead of the Abbey Stadium, the Scot said: "It is. When I tell people they start laughing.

"Cambridge were in what's now the Championship. Arsenal manager Terry Neill called me at my house in Glasgow and told me they were going to sign me, but a week later, they called back and said: 'we've decided to take you on loan'.

"I wasn't having that, leaving Celtic to go on loan, so I turned it down. Arsenal went on to buy the late Tommy Caton instead. I joined Cambridge and played every week, which I wasn't doing at Celtic."

"We were relegated two years in a row at Cambridge before I moved to Bristol City. That league had Newcastle United in it, with Kevin Keegan and Chris Waddle, and Chelsea, with Kerry Dixon and David Speedie. It was a really tough league and Cambridge were the smallest club in the division - as they would be now.

"We went down and there was a chain reaction which couldn't be stopped and we went down again. I played nearly 600 games in my career and it was varied through the divisions. That helps me as a coach and I wouldn't change it, though maybe I should have said yes to Arsenal."

Read the full One-on-One interview with David Moyes in the March 2015 issue of FourFourTwo, available now, in which he spills the beans on banning chips at Old Trafford and picking a fight with Duncan Ferguson. The magazine also tells the tale of Arsenal star Alexis Sanchez, meets super agent Jorge Mendes and watches non-league's new moneymen, AFC Fylde and Barrow, face off. Subscribe!