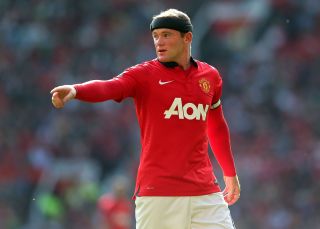 The 27-year-old was linked with a move to rivals Chelsea in the close-season, but United rejected those overtures and he has vindicated the club's desire to retain his services by notching three goals in six Premier League appearances this season.

Rooney took that form into the recent international break, opening the scoring in England's FIFA World Cup qualifying matches with Montenegro and Poland, as Roy Hodgson's men booked their place in Brazil.

But the forward's impressive performances have come as no surprise to Moyes, who says he has been exemplary ever since taking the reins at Old Trafford.

The Scot said: "I saw him like this on the first day of pre-season yet I had to keep telling everyone that was the case because the media thought it was different.

"I saw him in great form. He was in great fettle. His training was fantastic from day one.

"But people kept saying different things and I found it difficult to prove it different.

"You can see by his form and the goals he is scoring that what I was saying was right."

Moyes also hailed the way Rooney is handling the expectation of being one of United's leading stars.

He added: "He's at the age in his career where he would be one of the main players and he's certainly a main player for Manchester United.

"He takes responsibility, scores the goals that are required and he's done that from a young age.

"The age he is now, he's got that maturity and it shows in how he plays and the condition he is in with the way he is playing for club and country."

United - who occupy ninth in the table - continue their Premier League campaign when they welcome Southampton to Old Trafford on Saturday.