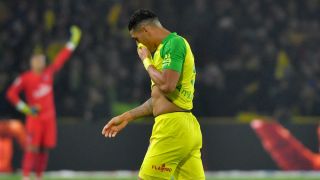 Nantes defender Diego Carlos has seen a red card quashed by the French Professional League (LFP) and received an apology from referee Tony Chapron following the pair's astonishing clash towards the end of Sunday's 1-0 defeat to Paris Saint-Germain.

Carlos collided with Chapron when attempting to join a Nantes counter-attack during stoppage time at the Stade de la Beaujoire, causing the official to tumble to the turf.

Chapron responded by kicking out at Carlos' right shin and, after the player turned to complain, he was shown a second yellow card.

In a statement on their official website, Nantes confirmed an LFP disciplinary committee had "corrected a clearly erroneous decision" by withdrawing Carlos' latter caution, meaning he is available for action next time out at Toulouse.

Chapron's return to action will not be so swift after the French Football Federation (FFF) announced on Monday he is be suspended until further notice and set to face a disciplinary hearing.

The 45-year-old issued a statement to the AFP news agency describing his behaviour as "inappropriate" and cited a recent injury in mitigation.

"At the time of the collision, I felt a sharp pain where I had recently suffered an injury,"Chapron said. "My unfortunate reaction was to stick my leg out towards the player.

"This awkward gesture was inappropriate, so I want to present my apologies to Diego Carlos after this action.

"An additional report was sent to the disciplinary committee so that the booking received by the Nantes player was withdrawn, since, in view of the images, his gesture [the collision] did not seem to me to be deliberate.

"I now reserve my comments for the competent authorities."

Chapron had been due to referee the midweek Ligue 1 clash between Angers and Troyes.