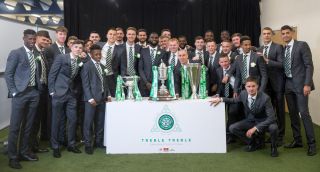 Neil Lennon described his Celtic side as “immortal” after clinching an unprecedented domestic triple treble with a 2-1 William Hill Scottish Cup final win over Hearts at Hampden Park.

After an absorbing but goalless first half, Gorgie attacker Ryan Edwards struck from close range in the 52nd minute.

Hoops striker Odsonne Edouard levelled with a penalty just after the hour mark before firing in the dramatic winner with eight minutes remaining.

Lennon, who was brought in until the end of the season when Brendan Rodgers left for Leicester in February, was offered the post on a permanent basis after the final whistle.

While admitting there was a “good chance” he would accept the offer, he paid tribute to the club’s history makers.

The Northern Irishman, a former Celtic player and manager, said: “It is hard to quantify what this team has done. You will never see it again.

“You could see the emotion and tension in the game, they had to stretch themselves to the limits to win.

“But they deserved to win it. They are immortal now. In my career the treble was the holy grail, these guys have done it three years consecutively.”

Lennon also noted the date of the club’s achievement.

May 25, 1967 was the day Celtic became the first British team to win the European Cup and the players wore numbers five and nine on their shorts in tribute to skipper of that team Billy McNeill and striker Stevie Chalmers, who scored the winning goal in the 2-1 win over Inter Milan, after both died recently.

Lennon said: “It is unbelievable. And it is the 25th of May so it is quite synonymous that we have two magnificent days in the history of the club on the same date.”

Hearts head coach Craig Levein was left waiting for his first trophy win as a player or manager.

The former Hearts and Scotland defender was “terribly disappointed to end up on the losing side” but offered his congratulations to Celtic.

He said: “I find it very difficult to sit here to be honest, I feel extremely disappointed for everybody associated with the club.

“It’s a bitter blow, although I must congratulate Celtic, they have won the treble three times in row.

“I’m very proud of the way the players performed and I feel the pain that they feel and the supporters feel as well.

“We defended extremely well the whole match apart from a couple of occasions. The difficulty is, when you play against opposition who have very, very good players, then they tend to punish you.

“Our plan was, if possible, not to give up any opportunities, and that was going particularly well.

“It’s very difficult for me to be critical of anybody. They all tried ever so hard to implement the game plan. They did the running they needed to do, showed composure when we got into good areas.

“I don’t think any of them will go to be bed feeling that they let Hearts down.”