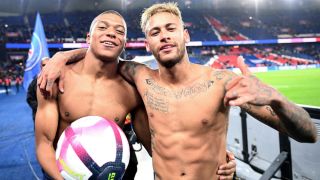 Former Barcelona forward Neymar arrived in Paris as PSG's star man but he has company at Parc des Princes, where Mbappe continues to shine.

"My son loves Mbappe a lot," Neymar said. "I took him to training and he was talking about Kylian all the time.

"He wanted to take a picture to show his friends at school, he took it and was very happy."

The former Monaco forward also became the youngest player – at 19 years and nine months – to score four goals in one game in the same period.