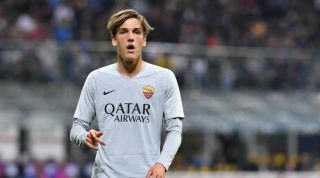 Nicolo Zaniolo's agent has claimed that Tottenham wanted to sign his player this summer.

Spurs broke their transfer record to sign Tanguy Ndombele for £54m and also added Giovani Lo Celso, Ryan Sessegnon and Jack Clarke, who returned to Leeds on a season-long loan.

Zaniolo was another player the north Londoners kept tabs on, but the Italian's representative has explained that Mauricio Pochettino ultimately opted for Lo Celso instead.

"He renewed [his contract] with Roma and is fine at Roma, but obviously we enjoyed the great interest of Tottenham, who were runners-up in the Champions League,” Claudio Vigorelli told the Daily Mail.

“Their concrete interest in him shows how good the boy’s season was. Spurs thought a lot about Nicolo before taking Lo Celso, they focused their attention on him seriously - more than any other club even beyond the Premier League. I can say that only Mauricio Pochettino’s club has carried out such in-depth market analysis in England."

The 20-year-old Zaniolo enjoyed an excellent breakout campaign at Roma in 2018/19, making 27 Serie A appearances following his move from Inter.

And Vigorelli sees similarities between his client and former Tottenham and England midfielder Paul Gascoigne.

“The boy has a mild character despite what is written and sometimes said in Italy. He is a serious professional upon whom Italy will rely in the future. He was born to be a footballer and wants to play football at great levels.

“[Roma manager Paulo] Fonseca has designed an important role for him and trained young talents very well in the past. Zaniolo resembles Gascoigne very much for his physical qualities but he has a much milder character.

“Now Fonseca is playing him in central midfield, a position he likes, where he can become just like Gascoigne: devastating with his technique and quality. He is a creative player who has pace and muscle, which is a rare commodity in Italy.”

Tottenham will resume their Premier League campaign against Crystal Palace on Saturday.