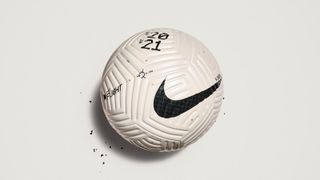 The Premier League ball for the 2020/21 season will not be revealed until July, but the release of the Nike Flight football – claimed to be a "revolution in football aerodynamics" – gives us a good idea of what it will be like.

Nike says this ball has been eight years in the making, with a new design the company reckons will prevent inconsistencies in ball flight (that's "wobbling in the air like a flyaway" to us).

This is clearly intended to be the template for all Nike footballs over the next few years, with FourFourTwo understanding that the Flight's design will be going into the new Premier League ball.

The designers went through 68 different iterations of the ball, over the course of thousands of hours and with testing help from over 800 athletes, before landing on this final design.

BUY IT NOW Get your own Nike Flight football for £119.95 here

The Flight's outer layer only has four panels, rather than the 12 you'd normally find on a ball, but is covered in grooves that should help it keep stable in the air.

It even has 3D printed ink, designed specifically to ensure the ball has grip on the surface in any weather – so no more blaming the light drizzle when you let the ball squirm through your legs like Massimo Taibi.

The grooves, part of the Aerosculpt technology invented by Nike's Innovation Equipment Lab, and reportedly deliver a benefit of a 30% truer flight in the air.

“The construction started with a square-shaped Aerotrack groove," according to Kieran Ronan, Nike Senior Director for Global Equipment. "Over the course of the 68 iterations, we modified the shape of the groove, added sculpted chevrons and explored multiple features throughout to deliver one geometric pattern that helps promote a more stable flight."

The ball is already on sale, and you can get your hands on it now for £119.95. With a beautiful minimalist design, this is looking likely to be the template for every new ball Nike introduce for a generation – a proto 'base' football that other designs will build on.