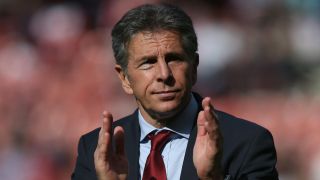 Southampton manager Claude Puel dismissed speculation over whether he would remain in charge after his side were beaten 1-0 at home by Stoke City in their final game of the season, saying: "It's not a question".

Peter Crouch's headed goal after an hour was enough to settle a tight game at St Mary's and leave Puel's Saints with a record of just one win in their last eight Premier League matches and no goals from their last four home games.

Puel, who was appointed in June 2016, has two years left to run on his contract but a chorus of boos rang out around the stadium after the final whistle, leaving the club's owners in no doubt about the supporters' feelings.

The Frenchman defended his players' achievement of finishing eighth in the final table, telling BBC Radio Solent: "We finished eighth in the table, which is a good reward because it was a difficult league with all the good teams in the first places in the table.

"To finish eighth is good and interesting. For next season we need to improve, to continue this work.

"We'll see if we can improve the squad. If it's not possible we'll continue to work in training and give our players confidence. Sometimes we create opportunities but the players lack confidence.

"I'm confident in the squad. They had a fantastic spirit and attitude throughout the season.

On the matter of whether or not he will be in charge at the start of next season, Puel added: "I work for Southampton and I have two years left on my contract. For me, it's not a question."

Opposite number Mark Hughes was left to reflect on his first finish in the bottom half of the table since taking charge at Stoke, but he said the club didn't need an overhaul in order to improve next season.

He told the Stoke Sentinel: "We have finished 13th and that's the first time I have been outside the top 10 when I have been in charge of a Premier League club for a full season.

"We finished 13th, but two points behind Southampton who are in eighth, so it's fine margins. Hopefully next year we will be better again. We've got a good club, good players and we will try to keep on adding quality.

"I don't think it's radical change that we need. It's evolution, not revolution."