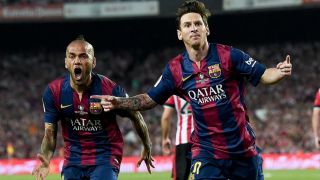 Dani Alves has responded to losing his status as the player to provide the most assists for Lionel Messi in LaLiga – and he is not happy.

Luis Suarez overtook Alves' tally of 26 assists to Barcelona's talismanic forward when setting up Messi's goal in Sunday's 1-1 draw with Valencia and the right-back – who now plays for Paris Saint-Germain – replied on Twitter to a post confirming the news by saying: "Nooooooo!!!"

The Brazilian followed up with two tears of joy emojis, though, suggesting he has taken former team-mate Suarez usurping him in good spirits.

Alves ended an eight-year stay with Barcelona to join Juventus in 2016 before moving on to French giants PSG a year later.