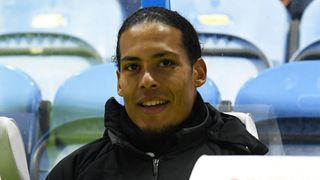 Van Dijk joined from Southampton for £75million at the start of the month, a move that made the Netherlands international the most expensive defender of all time.

Although the 26-year-old enjoyed a dream debut, heading a late winner against Merseyside rivals Everton in the FA Cup, he was taken out of the firing line by Klopp following the back-to-back defeats against Swansea City and West Brom.

Joel Matip and Dejan Lovren were reunited at the heart of defence and their manager maintains Van Dijk's Anfield career will be developed at a pace that pays no mind to his hefty fee.

"It's a completely normal – they've played longer together than Virgil has played with them," Klopp told a post-match news conference.

"It's a very important position and very important that it is really tuned between the parts and stuff like that. For today, it was simply a physical thing and that's it."

Klopp reflected on Daniel Sturridge's loan move to West Brom, conceding it made sense for the England striker to seek pastures new and hopefully boost his chances of a World Cup place.

Fellow forward Danny Ings has been mentioned as a possible target for Newcastle United, West Ham and Crystal Palace, although Klopp dampened such talk in his own inimitable style.

"It would be funny if someone calls for Ingsy. I would love to respond," he added.

​"There's no chance Ingsy is on the market tomorrow. Only if I'm unconscious! "